Day 01: Arrive Delhi+ City Tour Of Delhi
As you arrive at the Delhi Airport, our tour representative would greet and assist you to the pre-booked hotel. Check in to the hotel After relaxing for a while, get ready for a city tour. On the 1st day of your 3 Day Golden Triangle Tour India arrival in Delhi .In New Delhi we visit the 11th century Qutab Minar Tower. Qutab Minar Tower, built by Qutub-ud- din Aibek of the Slave Dynasty. Qutb Minar, (aLSO spelled Qutub Minar) at 73 metres, is world’s tallest rubble masonry minaret. It is a UNESCO World Heritage Site. Then we will visit The India Gate, a memorial raised in

honour of the Indian soldiers martyred during the Afghan war and drive past the grand government buildings the President’s House and Parliament House all dating back to the time of British Raj. Overnight Stay in the hotel.

Day 02: Delhi To Agra +City Tour Of Agra
After having an early breakfast we leave at 8am – to explore the monumental heritage of the Great Mughals.First in the list would be the wonder of the world, the beautiful Taj Mahal. Taj Mahal one of the Seven Wonders of the World . It is said “A thing of beauty is a joy forever”. It’s a wealth of white marble

and semi-precious stone – undoubtedly the highlight of the 3 Day Golden Triangle Tour India. The Taj Mahal has a charm of its own. It is well-known that the Taj Mahal was built by the famous Mughal Emperor Shah Jahan, in memory of his beloved wife Mumtaz Mahal. (Taj Mahal remain closed on every Friday).

Then we visit Agra Fort, a Unesco World Heritage Site this powerful fortress of red sandstone encompasses, within its 2.5-km- long enclosure walls, the imperial city of the Mughal rulers. It comprises many fairy-tale palaces, such as the Jahangir Palace and the Khas Mahal, built by Shah Jahan; audience halls, such as the Diwan-i- Khas; 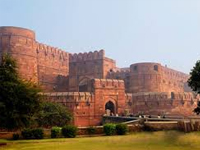 After having a lavish lunch and spending a comfortable time at the lunch you will be taken to a Marble Factory where you can see master craftsmen making Marble Inlay products (Same workmanship decorates the Taj Mahal).

Established in 1862, this store is one of the oldest businesses in entire Northern India. There you can see a beautiful collection of antiques and other artefacts which were presented to this family by the Mughals and are now their Family Treasures. You can also meet the owners and know more about their ancestors who were legal 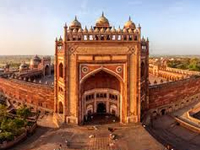 advisors and jewelers in the Mughal Court. Feel free to explore the whereabouts.

Then we will move ahead to Jaipur. Optional –Enroute we stop to visit Fatehpur Sikri – which has been described as “the world’s most perfectly preserved ghost town”. Built by Akbar in the late 16th century, it was abandoned after only 14 years, and the elegant buildings of this superb walled city remain intact to this day. Overnight stay at hotel.

Day 03: Sightseeing At Jaipur+Drive To Delhi
On last day of 3 Day Golden Triangle Tour India, After early breakfast check out & proceed to visit of Amber Fort (8 am)– (ascend the imposing fort on a decorated painted elephant), which used to be the capital of the Kachhwaha clan, till Jaipur was made the official capital in 1727. Hawa Mahal – built in 1799 by Maharaja Sawai Pratap Singh, Hawa Mahal is the most stunning sight in the city of Jaipur.

After lunch, proceed to visit City Palace – A delightful blend of Mughal and

traditional Rajasthani architecture, the City Palace sprawls over one-seventh of the area in the walled city. It houses the Chandra Mahal, Shri Govind Dev Temple and the City Palace Museum.

Jantar Mantar- This is the largest and the best preserved of the five observatories built by Jai Singh II in different parts of the country. This observatory consisting of outsized astronomical instruments is still in use. Evening Transfer to Delhi. On arrival dropping at Airport to board next destination flight. Your 3 Day Golden Triangle Tour India Ends Here with sweet memories for Life time.

Find Us on these Social Sites